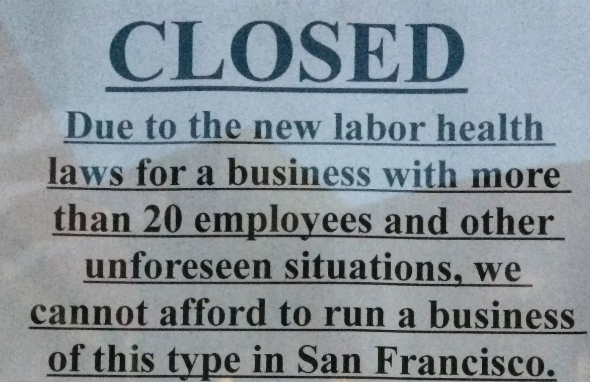 From SoMa to the Mission, across San Francisco Restaurants are closing their doors. Recently, Yelp reported that the rate of closures in the city is outpacing openings by 9%. Despite the strong economy, some iconic Bay Area restaurants like Fremont Diner, Camino, Farmerbrown, Mission Pie, Shed and Terra have lost the battle to stay open.

In truth, there are many contributing factors as to why a restaurant could go out of business. Narrow profit margins make it hard to motivate owners and investors, while high rent, lack of foot traffic or an outdated concept also may add to the equation. But in San Francisco, restaurateurs are pointing to increased labor costs, and that combined with other issues is crafting a recipe for disaster for small independents.

Labor costs play a large role in why it’s so tough to run a restaurant in San Francisco, but they aren’t the only factor, owners are now facing challenges that no one saw coming.

The Rise of Uber Eats

Services like Doordash and Grubhub can extend the reach of your restaurant, but it comes at a cost: Those same delivery companies expect a 10% – 30% cut of profits.

By 2018, SF’s health mandate raised the per employee cost from $1.89 an hour to $2.83 per hour (for more than 100 employees). Combined with other rising costs, many owners had no other choice than to pass the costs along to guests as a surcharge.

Typically, a three to five percent surcharge is now added to a customers check to cover these SF-mandated costs. Unhappy guests have taken to social media to dispute the charges and threaten to never return – and worse, share their “negative” experience online. This causes many owners to rethink the surcharge, and ultimately assume the cost to keep from losing guests and revenue.

“There are so many laws that are for the employee and against the employer,” Mitchell Fox told Eater in 2015. Fox was co-owner of Source, a SoMa vegetarian restaurant, which was forced to close due to issues with the SF labor board.

With the job market booming, all around the Bay Area restaurants are struggling to hire good people. Employers trying to recruit potential employees are lucky to get a bite and even luckier if the potential new hire shows up for the interview – and doesn’t “ghost” shortly after starting the job.

All independents agree this is the biggest challenge when running a restaurant. Minimum wage continues to climb. Berkeley and San Francisco raised their minimum wage to $15.59/hour on July 1. It’s also a nationwide trend: Lawmakers recently voted to raise the federal minimum wage from $7.25 to $15 by 2025. On top of increasing hourly wages, California requires owners to pay payroll taxes on tips – and staff must count tips as income.

Restaurant owners aren’t the only ones feeling the pain of wage increases. Suppliers like meat distributors, produce distributors, linen companies, among others, are as well. Meaning the cost of raw materials and delivery fees are going up.

Parking in the city is a nightmare and driving in it isn’t much better: Recently, the Bay Area tied with Los Angeles for most congested freeways. In fact, traffic in the Bay Area has caused more than 35% of workers to quit their jobs – or become super commuters (if they have the means).

Sadly, most in-line employees (like servers and busboys) can’t afford to take Uber and Lyft to work. Public transportation, like Muni, Cal-Train and B.A.R.T. can be dangerous and often encounter delays. Frustrated, many employees wind up late to work or quitting all-together.

In this day and age, restaurateurs need to use every tool in the box to fight back, and they are – enlisting lobbyist and help from the city. But small business owners can’t depnd just on others to solve these problems, they have to take action themeselves – in the form of operational improvements, and reduce costs.

EyeSpy can help you make your business more efficient. We offer a whole suite of restuarant business services that can help you improve your operations. We’ve helped many struggling SF eateries no only survive, but thrive. Don’t wait until you have to close your doors – contact us now for a free consultation.