How Dunkin’ Doughnuts is Reinventing Coffee and Convenience 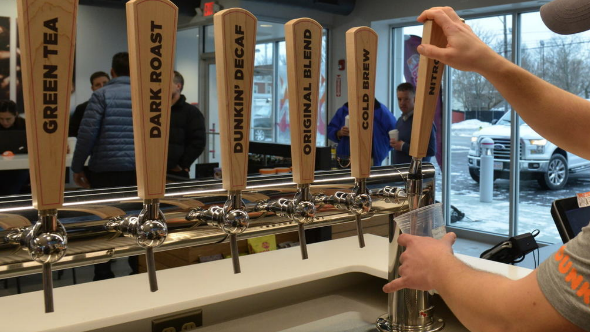 For a second, the bar and stools might make you think you’re in a bar. Eight draft handles dispense, not beer, but cold-brewed coffee. (Photo: Dunkin’ Doughnuts)

The ongoing war of coffeehouses continues to rage. In the latest salvo (and in an effort to one-up other popular hot beverage chains), Dunkin’ Doughnuts is turning its own concept on its ear.

The Canton, Massachusetts-based company recently announced it would remove ‘Doughnuts’ from it name, to be known only as ‘Dunkin’ going forward.’ It’s not a stunt, unlike International House of Pancakes which recently changed their name to embrace burgers (shortly after, IHOP changed their name back). Instead, it’s part of a ongoing trend where chains are merging foodservice channels.

The Next Generation for Dunkin’

Looking around the new store concept in Boston, on one side customers are met by refrigerator cases of grab and go fresh fruit, snacks and other boxed and baked goods. Doughnuts have been moved front and center, so customers can review and make a selection while in line.

On the other side, a row of taps. Eight draft handles dispense, not beer, but cold-brewed coffee. For a second, the bar and stools might make you think you’re in a bar, but the rich coffee smell that wafts through the location quickly reminds you that is not the case.

As far as the overall look of the restaurant interior, many proponents and detractors of the new concept have noted that by slightly changing the pink branding color to green, the place would look alot like a Starbucks.

Dunkin’ Doughnuts is also re-imagined the outside of their store. The drive-thru has an express pickup lane for customers who ordered and paid through the app. Execs say the drive-thru benchmark was set by Chick-fil-A, who many consider ushered in the updated drive-thru concept, but Dunkin’ aims to make Chick-fil-A’s system look antiquated.

Dan Wheeler, vice president of strategic initiatives and innovation for Dunkin’ Donuts parent company Dunkin’ Brands told press at a recent Dunkin’ store opening in Concord, CA (the West Coast is a primary target for Dunkin’ expansion), “This next-generation store is a complete transformation for our brand – an on-the-go, beverage-led brand.”

The new concept was developed with one goal in mind: streamlining restaurant operations to expedite a customers experience, aka convenience. The menu has also been optimized and trimmed down, and customers are queueing at the bar for a cold-brew pour.

Dunkin’ is testing the concept in limited areas under the name Next Generation, but it looks like it has all the hallmarks of a successful launch.