Restaurant Menus of the Future are Plant Based 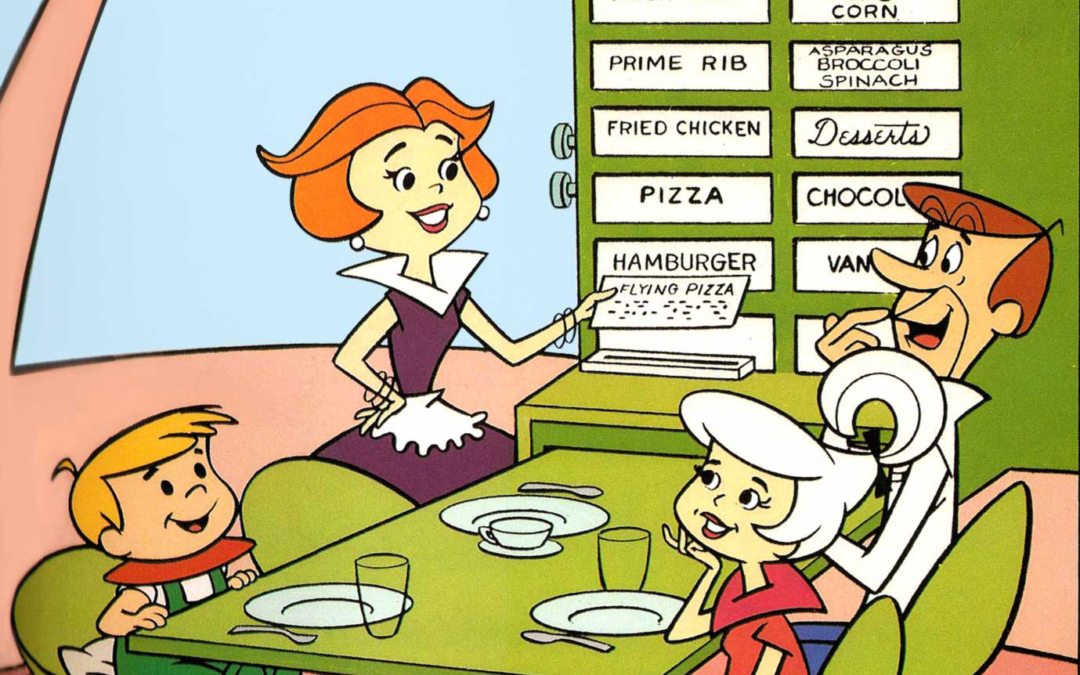 The Jetsons order a meal from their space-age food dispenser. The popular cartoon show from the early 60’s showcased the future (and the future of food) in an…interesting way. (Image: © Hanna-Barbera Productions)

We all know that meat can be bad for our health but just how bad? Well, meat is now classified by the World Health Organization as a Group 1 carcinogen. (That’s the same group as cigarettes.) A meat based diet also strongly contributes to heart disease which is the leading cause of death in the US. In addition to being bad for our bodies, meat production is also bad for the environment.

In fact, the meat industry accounts for 18% of all greenhouse gas emissions. Factory farms are also a breeding ground for diseases and could produce the next pandemic virus. And while many of us know about the serious effects of meat on our health and the environment we aren’t ready to give it up, just yet. Why? Mainly because of the lack of alternatives that taste and have the texture of beef, chicken, fish or pork.

That hasn’t stopped restaurants that have removed meat and dairy from their menus and are enticing customers to enjoy a meal without it. Many restaurants are making the same delicious cuisines but now with vegan substitutes, and guess what? They taste just as good. So now you can have your cheeseburger or spaghetti with meatballs without feeling guilty.

Beyond Meat and several other vegan food start-ups have now become mainstream, propelled in part by the fact veganism is “in” – in reality both major food producers and customers have been looking for more healthier alternatives for a few years now. Celebrities like Beyonce and Billy Ellish are vegan. Here in the Bay Area the trend continues to explode, with San Francisco now the nation’s most vegan friendly city.

But non vegans are where the industry is growing the most. 93% of Beyond Meat’s consumers are meat eaters. According to another study, more than half of U.S. consumers said they’d consider eating plant-based alternatives some of the time. The number one reason non-vegans are buying these alternatives? They are finally starting to taste like meat. Think about that for a second. A plant-based product. That tastes like meat. Seems like we are living in the future – just as the Jetsons predicted.

Speaking of meat, the global meat substitutes sector has already grown to 20.7 billion and by 2024 it’s expected to be a 23.2 billion dollar industry in just a few years. The message is clear: Plant-based menu items are critical to building menus of the future.

With the new plant-based options, not only can consumers feel good about their decision to eat at vegan restaurants but many restaurant owners can feel good about the product they are providing too. Giving the public an option for healthy, environmentally friendly and still crave-worthy food is bringing new joys to restaurateurs.

It may seem risky to go plant based and right now, and honestly, it is. But, the demand is growing rapidly and with more major restaurants and chains leading the charge, the more consumer demand and acceptance there will be. Candidly, you don’t need a large vegan clientele, you just need plant-based menu items that will bring omnivores back for more.

The Future of Food

Restaurants all across the globe are joining the trend. From the Michelin-rated New York restaurant Eleven Madison Park to the french fine dining restaurant Gauthier Soho in London. Smaller U.S. establishments in areas you’d think would be anti-vegan are also taking the plunge like 2 Guys Pizza – Planet Family Food, in Henderson, NC.

As an industry, we need to address and fight head on how we feed the world. Meat consumption and the problems it brings with it are a global issue and something restaurant owners can start tackling.

Are you looking to revamp your menu? EyeSpy can help you embrace the a plant-based menu of the future. Our dedicated and knowledgable staff can help you with culinary kitchen management and consulting that is tailored to your business. Together, we can make a difference, one meal at a time.